Chondrodysplasia in a Havanese Dog 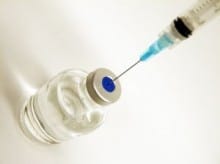 Chondrodysplasia in a Havanese Dog

There are a variety of health issues that can surface in a Havanese dog. Some of them are due to genetics, while others can come about because of the environment they grow up in. Whatever the case might be, the issue we want to discuss today involves Chondrodysplasia and your havanese dog.

Chondrodysplasia is short for Osteochondrodysplasia. This is a disorder that affects the development of bones and cartilage. Havanese dogs are simply unlucky, because this can be a crippling genetic disorder they never see coming. You can see it early on because their limbs might have odd shapes and lengths.

The first sign is usually found in the front legs, but eventually working its way throughout all four legs. However, even though it is tough to see your Havanese hobbling around from one place to another, there is additional information that can help you from dealing with this situation altogether.

Chondrodysplasia is an autosomal recessive gene. In order for your dog to have the disorder, both of its parents have to carry this gene. If they don’t, then Chondrodysplasia becomes a mood point. So anytime you’re looking for a new puppy to take home, be sure to find out a little background information on the pup’s parents.

The History of Chondrodysplasia

Back in the 1950s and 1960s, the United States was noticing more and more litters with deformed puppies. Everyone was perplexed because the parents didn’t show any signs of having Chondrodysplasia themselves. Eventually in the early part of the 1970s, studies showed that a genetic disorder was present. However, in past diagnosis, veterinarians believed it was a form of rickets, which turned out to be wrong.

Most of the deformities were due to size, so the dogs were classified as “dwarves.” However, it created a lot of confusion, especially since the Havanese dog was already small in size. Today, we know the true identity to the deformities, and are taking the proper measures to eliminate it in future newborns.

When we try to control a disorder or disease, medicine is integrated into our daily regimen. When it comes to Chondrodysplasia, it’s all about the preventative measures. Since both parents must carry the gene, the best option is having both dogs tested before they start breeding pups. If they are both considered carriers, then the goal would be to match them with other dogs that do not carry this genetic trait.

Those who are about to purchase a puppy that is six weeks old or younger, you might consider having x-rays as a precautionary measure. Otherwise, Chondrodysplasia is virtually impossible to detect. Yes, this includes veterinarians trying to detect it. The good news is; it’s very possible for a Havanese dog to have abnormal legs, but no one ever really notices thanks to their longer coats.

The best type of practice amongst breeders is to make sure neither one of the parents are carrying the gene. Even though Chondrodysplasia in puppies requires both parents to carry it, one parent can pass the gene to the offspring without any deformities or side effects. Since the idea is to get rid of the disorder entirely, the smart choice would be breeding without the gene present at all.

In order to eliminate Chondrodysplasia completely, there are 3 steps that must be taken to prevent future litter outbreaks:

* Test Breeding – Utilizing the proper test can help us figure out whether or not your Havanese dog is a gene carrier. It’s a costly project for the country, but it could be an important factor for future litters.

* Sterilization – The only way to eliminate the recessive gene from a breed gene pool is by sterilizing all Chondrodysplasia Havanese dogs. Any parent that is about to produce a Chondrodysplasia pup should be sterilized as well.

* Find a Reputable Breeder – Purchasing a pure-bred Havanese dog is smart, especially if it comes from a reputable breeder. These individuals will be well aware of the Chondrodysplasia disorder, so they will most likely take the necessary steps to alleviate the risk. However, because of the testing costs, it’s possible you will be charged more for the puppy.

Besides an x-ray of the front legs, the easiest way to tell if a dog may have Chondrodysplasia, is to wet them down, soap them up with shampoo, and wrap the coat (while soapy) around the legs and chest of the dog, and take some pictures! The pictures enable you to study the dog’s legs & body carefully, later, and you’ll see a whole lot more than if you just look while soaping.

This is a two man job. Have someone take the pictures while you try to stack the dog after wetting and soaping. Remember that no wet dog is going to stack easily or correctly when wet and cold. Work quickly but accurately, having the photographer take a level, dead-on shot of the soaped dog.

If the person taking the picture is standing above the dog, or at an angle off centered from the dog, your pictures will not be accurate or helpful. A wet, cold dog will roach his back and look funny. That is okay! You are looking at the front legs this time, so pay no attention to the rest of the dog’s body right now.

Take a picture of the front, again having the photographer be level and centered to the dog’s front legs. Stack the dog the best that you can, and take a picture of both the left and right side of the dog also. 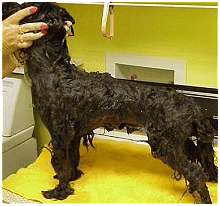 You can see from these pictures above, how it’s important to get level to the dog and centered, before taking the pictures. Once you get your pictures measure them with a ruler to see if your dog is equal and parallel. Below are some examples of how to measure. 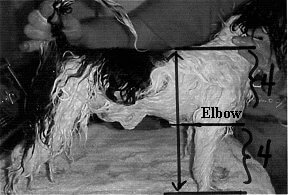 Dog should be equal from top of shoulders (withers)to elbow and from elbow to the footas this dog clearly is. The doglooks slightly longer than taller, as it should. 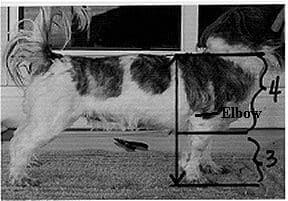 This dog is CD and is NOT equal.You can easily see how her elbowis way above the chest line, makingher proportions unequal. Notice also, how her body looks long. Actually,her legs are just short, due to premature closure of the growth plates in her legs. 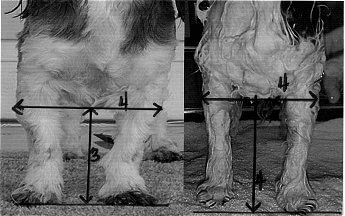 Above are the same two dogs, photographed from the front.See the difference in their proportions?The dog on the left is CD and displaysthe typical bowed (and asymmetrical)front of many CD dogs. The dog on the rightis balanced and equal and has straight forelegs.Note the asymmetrical chest wall of the first dog also.

There are variations in the severity of Chondrodysplasia. Some are very subtle and may appear to have straight legs & be asymmetric only.What is most interesting is that asymmetrical dogs, if diagnosed with cataracts will present with the cataract in the eye, on the same side as the crooked leg.

Below is a composite of 3 different fronts. The dog on the left has a straight, equal front.The middle dog is asymetrical (one leg is bowed)and the dog on the right has a bowed or “fiddle” front… both have CD.

1. If a Havanese appears too long bodied, soap them up, photograph them and measure them!What happens in CD is that the growth plates close too early, causing the legs to stop growing but the body continues to grow. Sometimes the pups are born with ‘shorter’ legs than they should have. This is another ‘sign’ you may be dealing with CD. Havanese are NOT a short legged & long bodied breed. They are a breed with EQUAL proportions: 1/3 head and neck, 1/3 body and 1/3 legs, with a body slightly longer than tall!

2. At 8 weeks we should be soaping up each pup and chosing the best pups we can, with the straightest legs at that point to go to show and breeding homes. (And these pups should be from straight fronted parents. Even better, from straight fronted grandparents too!) The farther we get from this, the better off our breed will be.

3. Re-evaluate the dogs at 6 months, 1 year and 2 yrs (and anytime in between to watch how they are growing!) Breeding away from these bad fronts (which again, is NOT part of the Havanese breed standard) can hopefully ensure that our wonderful breed will become again what it is supposed to be and at the same time, we’ll most likely be eliminating many of the health issues including the early onset blinding cataracts.

It’s important to say too, that not ALL CD dogs have health problems. Why some have genetic health issues and some don’t, is indeed perplexing, but hopefully in time, we’ll know more answers. We have many dogs in the study headed by Dr. Gelatt, that have two CD parents with cataracts, yet they themselves are way past the age for early onset cataracts. How can this be if the cataracts are a simple (AR) recessive gene? To date, no Havanese with straight legs have been diagnosed with early onset cataracts!

Below is an example of what can happen when someone breeds a crooked front to a straight front:

Have you ever wondered how out of one litter, there can be small Havanese and LARGE Havanese? Litter mates who look nothing alike? It’s really simple if you think about it. Let’s say, a CD bitch is bred to a normal straight legged male (who is not CD). The bitch passes on CD to 1/2 the pups (statistically speaking) in the litter and doesn’t pass it to the other half.

Genetically, this bitch is a big Havanese. Not in height, but in every other way… she’s over the ‘norm’ for weight, is probably rather course, may have a larger head than normal and is heavier boned. If her growth plates had not closed prematurely, she would probably be at the top or over the standard for height.

Now, she is going to pass on her genetic ‘size’ to her non CD pups. They will NOT have the premature closure of their growth plates and will be allowed to grow to their full genetic height. Voila! You end up with a large over sized (height wise) Havanese, with straight legs, but they are too tall for breeding or showing. 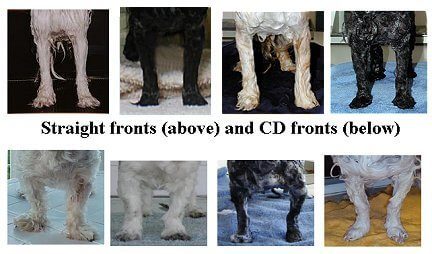 Remember that you cannot expect a cold wet dog to stand perfectly straight. Dogs on top left and 3rd top from the left, are leaning a bit, but legs are still symmetrical and straight. You want to evaluate and look at mostly the ‘inside’ of the legs. It should make a ‘square’ with the legs and chest. The chest should not be higher on one side than the other. The legs can appear straight but may be asymmetrical which is still CD. Look at the lower level of the chest wall. Is it even? See the chests on the CD dogs in the lower row, above?Their chests are asymmetrical (NOT even on both ends).

This sweet little guy (below) is severely CD. Note how short his front legs are compared tohis rear legs. His feet are SO ‘easty/westy’ that it’s amazing he can walk at all. He is only2 yrs old. He seems to be a product of breeding CD to CD to CD to CD, for his legs to bethis deformed. In ‘my’ opinion, breeders should be soaping, looking and doing all they canso they don’t produce more puppies like this little guy. 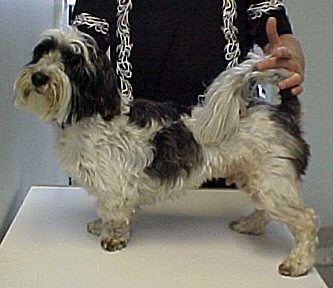 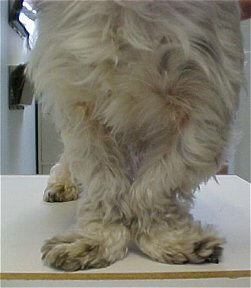 If you are a breeder, I hope this page has provided you with some food for thought, education and hope for the future. If you are a puppy buyer, I hope the information here, will enable you to be more educated about the Havanese breed and help you to be able to choose your breeder and future puppy more carefully.

Again, not all CD dogs have health problems but too many of them do. Like any syndrome or disease, it can very well carry with it other problems besides just the bone deformity.